skip to main | skip to sidebar

If you're looking for a specific project that I've done, please click here for a categorized list page.

If an article interests you, please click below it where it tells the number of comments and leave one. I appreciate all input.

Get My Blog In Your Email

It has been a bit since I posted last. There is good reason though. I have been working on a project that is dear to me. You see, this is a project that I am building to be used by my grandchildren, and hopefully, my grand children's children.
I have two grandchildren that I seldom see. They are teenagers and I've seen them maybe ten times in their life. To make a long story short, my oldest son doesn't come around much and I am not part of the grand children's lives, and did not see them grow up.
I have a third grandchild though that will be here in a couple of months. I will be able to be a part of this child's life growing up. Some family members, like my wife, have been busy buying things for the baby. I, as usually, prefer building to buying.
So I set out deciding on a cradle to build for this grandchild. I pondered on making one of the cradles I'd already built. I thought about ways to make them special. In the end though, this is my grandchild. I wanted to build something special. So I talked about it with my wife. She is always the best sounding board for my ideas. She reminded me of a real nice cradle I had drooled over several months ago. You can see, or order plans for it, here.
It is a boat cradle. Why a boat? I love boats. For health reasons, I gave up my own boat a couple of years ago. I couldn't get it in and out of the water without hurting my back. When I did, I usually hit a wave wrong and put myself down for days or weeks at a time. I miss boating though. A boat cradle for my coming grandchild was a great idea.
When I seen the site though, I had ideas on modifying a boat rocker I made some time ago. Then I done some reading on the Jordon Boat site. The plans available there used more traditional methods that would normally be on a real boat. This interested me greatly. I enjoy learning new techniques. So I order the plans.
Now for the build. 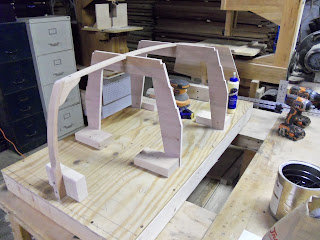 Unlike the boat rocker, or the boat shelves, I'd done in the past, this boat is build using forms. The reason is the more complex bends for the multiple planks. The other projects I'd done only had straight bends in them. This boat would have planks with bends, and a twist at the end to form a more elegant styling. This added, well, a twist to the job. 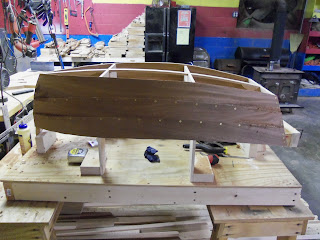 Then came the planking. This was interesting to say the least. I probably could have made it easier by choosing a different wood. I wanted the sapelle for the planking though. It was a good contrast to the oak backbone and accents I had planned. It all came together with some coaxing though. It took two days to plank the sides, working a little at a time. I found it easiest to start at an end and attach a little at a time, allowing the wood time to relax around the curvature of the forms. 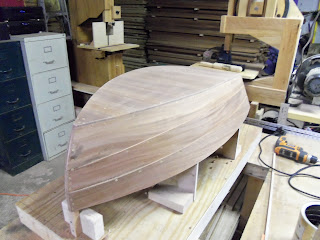 I used the same sapelle for the bottom.
The shop made band saw in the back, the one closest to the left of the photo, is what I used to resaw all the sapelle for this project. I think this is the most I've ever used that saw for this much resawing in a single project. The saw on the right is the one I use for curved cuts. I put both of those saws through a workout for this project. There is just something satisfying about using a tool you built yourself to work on a project. 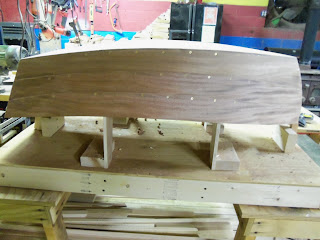 I used over two hundred brass screws for this project. I have never found a way to drive brass screws with a drill. So every one of the two hundred plus screws were put in by hand using a screwdriver.
The planking on this project, according to the plans, are supposed to be attached using brass rivets and roves. This was a technique I was looking forward to learning. However, when all was said and done, I was already over the budget I could afford on this project. So I wound up settling for brass screws. If I were building an actual floating boat, I would have to insist on the proper hardware. For this though, the screws serve the purpose and, in my opinion, still look great. 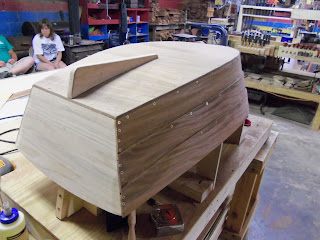 I forget what this rudder type board is called. I apologize for that. It was the last piece to go on though before taking the boat off the forms. 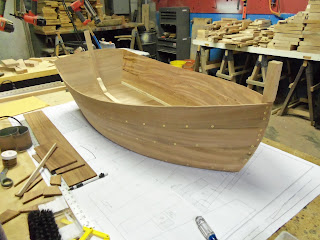 Taking the boat off of the forms was a nerve racking experience for me. I know that may sound funny to some. This was the first time for me building anything in this fashion though. In my mind, I had this image of all the planking popping off and flying all over the shop, or the pressure from the bends making the entire boat simply split in half.
For such a sturdily build vessel, it is amazingly light. 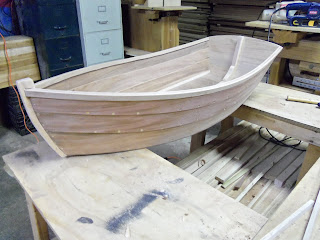 Last on the boat was oak stripping across the top of the top plank. I made them out of oak to match the other contrasting parts of the project.
Then I had to do a lot of sanding. I mean a whole lot. Because of the nature of the project and the protruding edges of the planking, I decided to not even mess with power sander. I done it all by hand. I didn't realize how big an undertaking that was going to be until I was lying in bed that night with my forearms cramping. 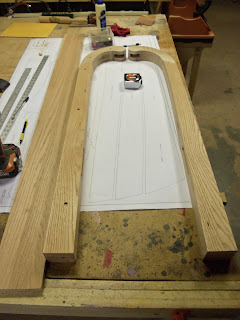 The davits, or stand as I call it, is made of oak. 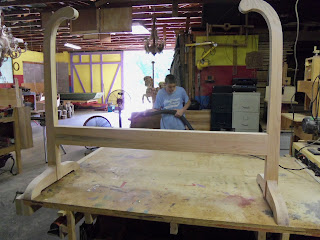 According to the plans, the feet and stretcher were supposed to be a single layer of material. Being oak, it would have been plenty strong enough. However, it didn't look right to me. So I added additional layers to make them look beefier to match the rest of the stand. 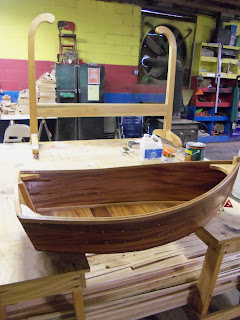 Finish took a couple of days. I used polyurethane for a finish. I know that may cause some controversy. I don't want to get into it though. I used poly because it gave me the look I wanted. I am of the belief that all finishes are safe once they are fully cured. Since I have a month or so before the baby is even born, I am sure the finish will be fully cured before the baby arrives. 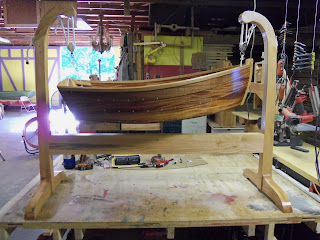 Last, but not least was to hang the boat from the stand. It is hung through a double pulley built into the frame, using a double block pulley between the frame and boat. It is attached under the frame pulley, ran though the blocks, through a hole in the frame, and tied off on cleats at the back of each side of the frame. This is of course way overboard for holding up a light boat and a baby. The double block system was used for looks. There are several ways explained in the plans for hanging the boat cradle, but I like this one. 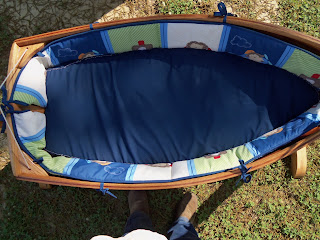 The last thing to do was install a mattress and padding.
The bumper padding is store bought padding that I fit into the sides. I drilled holes along the side and ends, fished the tie straps through and tied it securely to the sides. I had to sew two straps for the back corners.
Of course they do not make mattresses to fit a boat cradle, so I had to make one. It is two layers of foam padding attached to a piece of cardboard with thread. Then I stitched blue fabric around the edges, folded the remaining fabric underneath and used cloth glue to glue the excess to the bottom of the cardboard. I decided to use the cardboard as a means for keeping some stiffness to the bottom of it all to keep it in place, tight against the bumpers so the baby can't fall between the mattress and the sides.
The mattress taught me two important things. It taught me that I am much better at wood working than sewing, and it reminded me why I haven't sewed anything in about twenty years. I hate sewing.
The stitching on the mattress is absolutely terrible. I done my best though. I couldn't figure out how to do it on my wife's sewing machine. So it took me five hours to stitch the mattress. I don't want to look at another needle for a long time.
Now for some photos of the finished project. I may be a little biased, but I am proud of it. I put a more work into this project than I have on anything else in a long time. 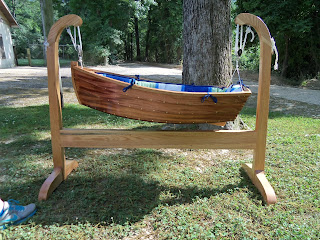 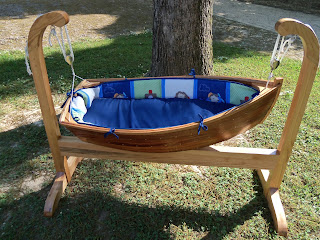 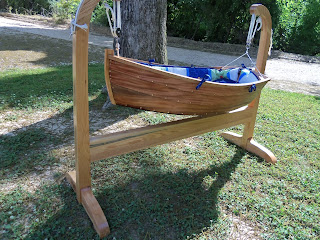 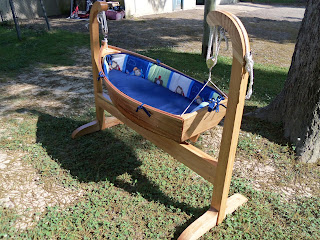 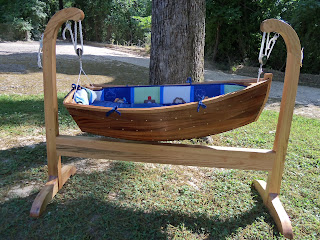 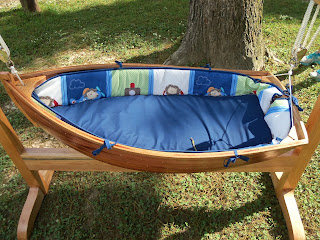 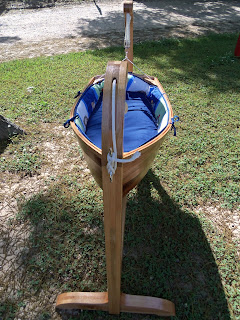